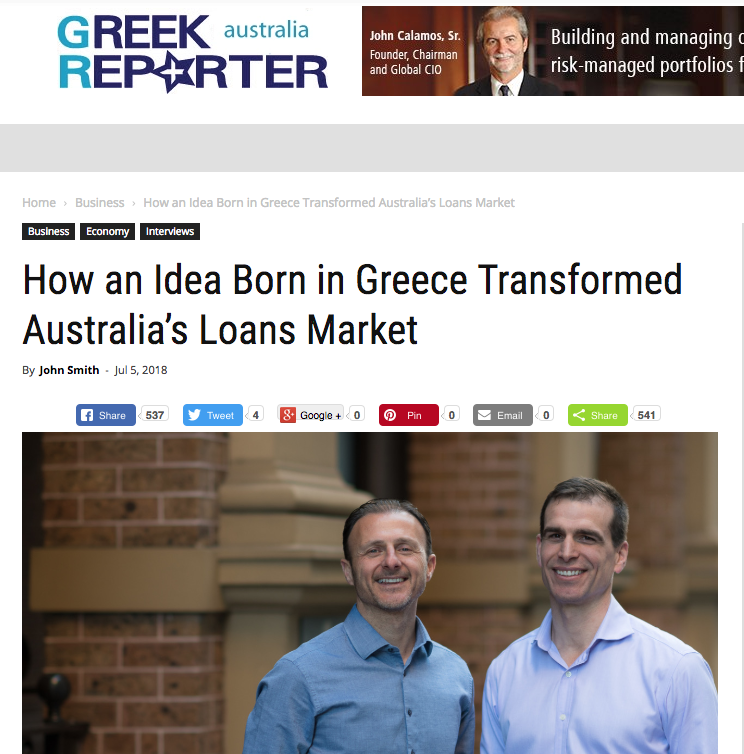 Mic and Bill, Lodex co-founders, have a big vision for the first online marketplace for loans and deposits. Bill had a great chat with the Greek Reporter, where they talked about where the idea came from and the journey so far. Check it out!

An idea born in a recession-hit Greek bank is making waves on the other side of the world, putting power into the hands of the consumer in the loans marketplace.

Lodex, co-founded by Agrinio native Bill Kalpouzanis who is now its co-CEO alongside Mic Phillipou, uses sophisticated technology to get customized quotes for their customers who are looking for a loan.

Its customers can benefit from expert advice and effectively ‘auction’ their loans, making lenders offer the best rates.

The firm has been gaining coverage in the Australian media, and Kalpouzanis spoke to Greek Reporter about how it all came about.

“The first idea came to mind while I was still in Greece working for a bank,” he says. “It played on my mind and after further discussions with my co-founder Mic, Lodex was born.”

The idea came about during Greece’s recession in 2014 when Kalpouzanis says “banks [were] trying to reduce their exposure to credit, and consumers were unwilling to apply for new loans, as the economic environment was unstable”.

It was Australia which presented an opportunity to put his model into practice, with banks showing growth for 15 years and the regulatory environment being kind to the kind of business Lodex wanted to become.

“Always at the forefront of innovation, I love making things simpler and more transparent. Just like e-bay transformed the retail industry through its auctioning model, I believe there is great opportunity, leveraging the available data, for a fairer marketplace to be born enabling consumers to take informed and quick decisions.

“I believe the world needs to be more transparent financial services and we see Lodex as part of this revolution.”

“We have been overwhelmed by the adoption of our platform in these seven months since we went live,” he adds.

“We have more than 32,000 members and have received more than AUD$360 million of loan auctions.

“Our members usually say ‘we love having lenders bidding for our business’ or that ‘the platform gave them the opportunity to negotiate great deals’.

“At the end of the day everyone likes getting competitive rates in an auction style marketplace rather than visiting branches with no negotiation power.”

Now settled in Australia with his wife and two sons, Kalpouzanis says the Lodex model is attracting interest from Europe and Southeast Asia. The company has no shortage of ambition, and Kalpouzanis says their vision is for Lodex to be a global platform.

“We have already received overwhelming interest to expand in other countries, mainly in Europe, and South East Asia and we are considering these opportunities. Our vision is for Lodex to become a global platform that will facilitate cross border transactions that’s why we are currently exploring new innovations like blockchain that will help us scale fast.”

Previous Post Lodex API - Chat with Bill & Jodie from the Team
Next Post Buying a New Car? 3 Tips to Help You Save Money